1 . Which of the following is NOT a main cause of hyperglycemia?

There are three main causes of hyperglycemia: diabetes, certain medications, and physiologic or psychologic stress. Diabetes is by far the most common cause of chronic hyperglycemia and is associated with many adverse effects on a patient's health, including impaired wound healing and increased risk for lower extremity ulcers and amputation. However, medication use and physiologic/psychologic stresses are also important contributors to hyperglycemia, particularly among hospitalized patients. When all of these factors are combined, a patient can be at significantly heightened risk for wound complications and poor outcomes.

2 . As of 2018, how many Americans were estimated to have diabetes?

Diabetes, known clinically as diabetes mellitus, is a progressive disease process affecting the fuel metabolism functioning within the body [1]. According to the Centers for Disease Control and Prevention (CDC), the prevalence of diabetes has increased 900% since 1958, when 0.93% of Americans had diabetes, with the sharpest increase occurring in the 2000s [2]. As of 2018, 13% of the United States population, or 34.1 million Americans, had diabetes [3]. Unfortunately, 7.3 million of these individuals are unaware of their diabetes diagnosis. Diabetes has been considered epidemic since the 1970s, and the number of Americans expected to have diagnosed or undiagnosed diabetes is estimated to be 84 million by the year 2060 [4].

3 . Which of the following is an established risk factor for the development of type 2 diabetes?

4 . A fasting plasma glucose level of 117 mg/dL would fit the diagnostic criteria for

5 . Which of the following physiologic changes is triggered by acute illness and can lead to hyperglycemia?

THE RELATIONSHIP BETWEEN ACUTE ILLNESS AND HYPERGLYCEMIA 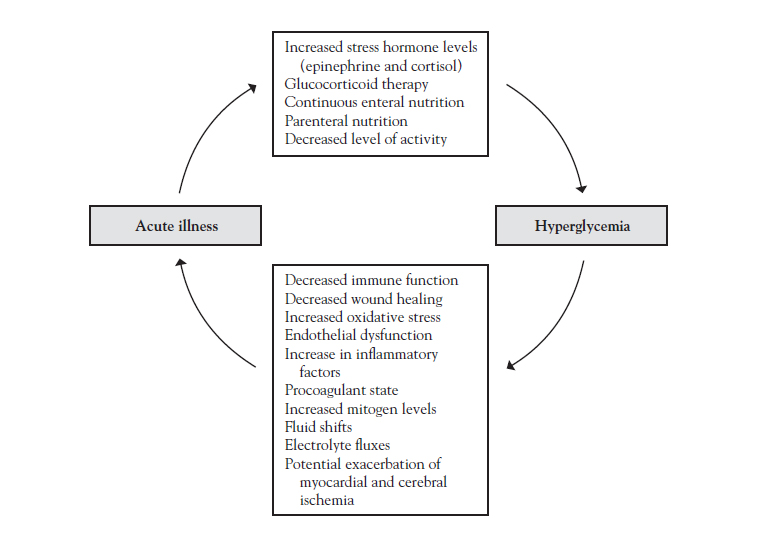 6 . What is the first phase of acute wound healing?

The pathophysiology of acute wound healing has been characterized as a hierarchical progression through four distinct phases. The first phase is coagulation and occurs immediately at the time of tissue injury [29]. The key cell activated in this phase is the platelet, which aggregates at the area of injury and binds with thrombin to form a plug. Vasoconstriction occurs, and cytokines and growth factors, including platelet-driven growth factors and fibroblast growth factors, are released [29]. These reactions initiate healing and act as chemoattractants for circulating polymorphonuclear cells and macrophage [30].

7 . The time necessary for an acute wound to be considered healed is typically

Simultaneously, scar tissue formation and collagen shortening occur, and fibroblasts are transformed into myofibroblasts, causing the wound to react and contract [30]. When the wound is completely covered with epithelium and not draining, it is considered healed. The entire process typically takes 10 to 14 days to complete in an acute wound [31]. This is followed closely by the remodeling phase, during which collagen fibrils in scar tissue are remodeled in a turnover process resulting from the interplay of degradation of the matrix metalloproteases and the production of matrix components from the fibroblasts. This final phase may continue for the next 6 to 12 months [30].

8 . Unlike the orderly healing process associated with most acute wounds, chronic wounds

Unlike the orderly healing process described for acute wounds, chronic wounds are stuck in a disorderly mix of inflammation and failed eruptions of proliferation [30]. Dysfunctional wound healing may occur during any phase of the healing process and may involve insufficient repair, excessive repair, or infection. The causes can be related to a predisposing disorder, such as diabetes, an acquired condition, such as hypoxia, or one of many potential medication interactions or alterations in nutrition [24].

9 . Which of the following delays wound healing in chronic wounds?

Hypovolemia also inhibits inflammation, as the physiologic response is vasoconstriction rather than the dilatation required to deliver inflammatory cells to the site of injury. Anti-inflammatory steroids prevent macrophages from migrating to the site of injury and inhibit the release of collagenase and plasminogen activator. Anti-inflammatory steroids also inhibit fibroblast migration into the wound during the reconstructive phase [24].

Optimal nutrition is important during all phases of healing because metabolic needs are increased. The substances most vital to healing include glucose, oxygen, and protein [31]. Because leukocytes require a glucose-rich environment to produce the adenosine-5 triphosphate (ATP) needed for chemotaxis, phagocytosis, and intracellular killing, individuals with poorly controlled diabetes heal poorly, mainly because of infection [33]. Individuals with diabetes are also at an increased risk for ischemic wounds, because they are likely to have both microvascular diseases that impair the microcirculation and altered glycosylated hemoglobin affinity for oxygen, with oxygen not readily released into the tissue. Oxygen delivery is also compromised by the hypoxemia state. Ischemic tissue is susceptible to infection, which in turn prolongs the inflammatory process.

Along with hypoxemia, hypoproteinemia lengthens inflammation by impairing fibroblast proliferation [24]. Most of the factors that interfere with the production of collagen in healing tissues are nutritional [24]. Scurvy, for example, is caused by a lack of ascorbic acid (vitamin C), which is one of the cofactors required for collagen formation by fibroblasts. As a result, patients with scurvy have poorly formed connective tissue and greatly impaired healing. Protein and other nutrients, including iron, oxygen, β-ketoglutarate, manganese, copper, and calcium, are required for collagen synthesis [34]. However, minute amounts of these substances are usually required as cofactors, so deficiencies are not generally clinically significant. Dysfunctional collagen overwhelming the surface of a wound is manifested by a keloid or hypertrophic scar, both of which are related to increased collagen synthesis and decreased collagen lysis [35].

10 . What percentage of patients with diabetes will develop diabetic ulcers?

The public health impact of wounds is immense. An estimated 2.5 million inpatients develop pressure injuries each year, particularly older and malnourished individuals [37]. Furthermore, as many as 34% of the 34.1 million individuals with diabetes in the United States will develop diabetic ulcers; many more will have venous ulcers or wounds that result from vascular disease [38]. The annual cost of treating wounds of this nature is estimated to be more than $15 billion, which has led to specific guidelines based on specialist organization consensus [37,39,40,41,75]. In patients with diabetes, neuropathy and microvascular disease are the greatest contributors to impaired wound healing, both of which can be improved with optimal management of blood glucose levels.

11 . Which of the following is the most common type of neuropathy among patients with diabetes?

Neuropathy refers to the impaired effectiveness of the nerves in conducting pain, pressure, or movement sensations. In many patients with diabetes, the development of neuropathy in the lower extremities leads to loss of protective sensation, resulting in undetected trauma and infection. The most common type of neuropathy in patients with diabetes is peripheral neuropathy, which affects the ends of the longest nerves first; the toes and feet are the most severely affected. Other types or neuropathy include autonomic neuropathy, mononeuropathy, and diabetic amyotrophy (also referred to as radiculoplexus neuropathy). In patients with peripheral neuropathy, the development of foot ulcers and even foot deformities is common, and the healing of these ulcers can be complicated by the presence of hyperglycemia [42].

12 . The most common triad leading to breakdown of the diabetic foot is

Foot deformities, such as claw toes or prominent metatarsal heads, are a proven risk factor for ulceration [26,42]. One cross-sectional study demonstrated that plantar callus accumulation was associated with an 11-fold increase in formation of diabetic foot ulceration [30]. In follow-up with these individuals, plantar ulceration occurred only at sites of callus in neuropathic feet. Other risk factors include a past history of foot ulcers or amputation, the presence of other microvascular complications, long duration of poorly controlled diabetes, increase in plantar foot pressures, and peripheral edema [30,43]. The most common triad leading to breakdown of the diabetic foot is peripheral neuropathy (insensitivity), deformity (claw toe), and trauma (from ill-fitting footwear, repetitive stress, or thermal damage) [30,42,44].

13 . Venous ulcers are caused by

Vascular ulcers may develop in the arterial, venous, or lymphatic systems from a variety of causes [33]. Patients with diabetes are at an increased risk for both arterial and venous ulcers. The pathophysiology of venous (or stasis) ulcers is related to venous hypertension that develops as the result of inadequate calf muscle pump action and either primary or secondary valvular incompetence [46]. Arterial ulcers, on the other hand, are wounds that will not heal due to compromised or inadequate arterial blood flow [33]. Arterial calcification is commonly detected in radiographs of diabetic feet and hands. This is related to calcification of the media on muscular arteries [43]. Differentiating between arterial and venous ulcers involves careful patient history and evaluating the appearance of the ulcer and surrounding skin (Table 2) [32].

14 . The surrounding skin of arterial ulcers

CHARACTERISTICS OF ARTERIAL AND VENOUS ULCERS

15 . Which of the following is NOT a treatment approach recommended for vascular ulcers?

Treatment and management of vascular ulceration include the following approaches [30,31,47]:

16 . Loss of sensation caused by sensory neuropathy typically begins with

Sensory neuropathy contributes to an inability to perceive injury to the foot due to the loss of protective sensation [33]. Individuals with sensory loss are seven times more likely to develop foot ulcers compared to those without neuropathic disorders [30]. Loss of sensation is the result of demyelination of the peripheral nerves (particularly the distal nerve endings) [27]. Presentation of this loss of sensory sensation typically begins with numbness or paresthesia of the toes and progresses upward to create a "stocking" effect to the extremity [48].

17 . Which of the following is a risk factor for the development of pressure injuries?

In addition to diabetes and hyperglycemia, there are many risk factors for the development of pressure injuries, including [24]:

18 . A partial thickness pressure ulcer with partial loss of dermis, without slough visible, is categorized as

Stage 2 pressure injury presents as shallow, open wounds with partial loss of the dermis. The wound bed is pink/red and without slough. A stage 2 pressure ulcer may also present as a serous fluid-filled blister [55]. Fat and deeper tissues are not visible, and slough and eschar are not present. These injuries are most commonly seen on the sacrum due to moisture and shear, and on the heel due to shear [55]. Skin tears, tape burns, incontinence-associated dermatitis, maceration, or excoriation of the skin should not be classified as stage 2 pressure ulcers [33].

19 . Patients with diabetes have been shown to have increased carriage rates for

In addition to hyperglycemia, obese patients with or without diabetes have a significantly increased risk of impaired wound healing than those of normal weight [60]. Severe obesity is associated with venous stasis disease, pitting pretibial edema, bronze edema (a result of extravasation of red blood cells into the skin), cellulitis, and obesity hypoventilation [65]. Furthermore, obesity is a known risk factor for surgical-site infection. Patients with diabetes have been shown to have increased carriage rates for Staphylococcus aureus colonization, a leading cause of surgical-site infection [61]. These conditions impact the body's ability to heal an incision, potentially leading to wound dehiscence, rhabdomyolysis, and complications of the skin and underlying tissue [60].

20 . When documenting wounds and ulcers, what is the optimum time interval between measurements?

The optimal time interval between wound measurements is approximately seven days. More frequent measurement is unlikely to demonstrate clinically relevant differences in wound dimension [24]. Weekly documentation should minimally include a reassessment of wound appearance. The NPIAP recommends the use of digital photography in documenting changes in dimension and base of wounds over time. These photographs may be used to supplement written documentation, but they should never be used as a replacement for clearly written documentation [69,70]. As noted, the face of a clock can be used to provide additional accuracy to the description of wound characteristics [71]. The terms used in documentation should represent objective data rather than subjective findings [24]. When documenting wounds, descriptive words such as "huge" or "deep" and diagnostic terms such as "infected" should be avoided. Instead, the objective descriptors such as "perierythema" or "induration" should be used [68].